Staxus says: It’s almost like getting two scenes for the price of one with this stupendous, dual-focused escapade, featuring Orri Gaul and Ben Isai going at it hammer-and-tong-style in one half of an apartment, and new boy, Jake Stark, enjoying a lengthy solo session in the other.

Only at the very end of proceedings, when the spunk’s about to fly, so to speak, do the three lads finally encounter each other.

Until that point, the action remains very much departmentalised; with the duo initially focused very much on foreskin play, whilst Stark reaches for his favourite arse toy and pleasures himself on his own.

Now if you’re a fan of the hairless look, then you’re in for a treat as far as young Gaul is concerned.

It’s a magnificent act of oral homage on Isai’s part, that’s for sure; and it’s not long before it’s getting its due reward in the form of a first-class fucking.

All of which culminates in the trio of buddies spewing like geysers for your amusement; the three beauts finally united, as Stark creams out a multi-shot blast of boy-batter for the wrap.

All the Staxus updates right here!

Face Down Ass Up

Want these hot dudes in your Inbox 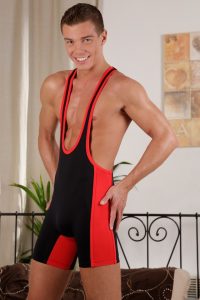