Young stud Palmer unloads his balls jerking with a frenzy!……

Spunk Worthy says: Palmer is from a small Midwestern town, 21 y/o, and found his way out to San Diego a couple years ago for “college” (although the tat on his chest might make you think otherwise.)
He hadn’t given much thought to doing porn until a buddy planted the seed a few months ago, telling Palmer that he’d made some cash jerking off on camera. Not being a shy one, Palmer got in touch one day, and the next day showed up ready to get naked for the world to see. Apparently, he’d anticipated doing a shoot because he took the initiative and stopped jerking off a week earlier! That’s what I call dedication.
Being a ginger, Palmer gets teased by his buddies all the time about being a “day walker” and all the other pejoratives. He laughed it off, though, saying that a lot of girls (and guys) are turned on by a guy with red hair. The carpet matches the drapes, too, even if the carpet was a bit short; I strongly encouraged him to grow out his bush for next time.
Palmer first started jerking off at a pretty young age and seemed to take to it with fervor, once going at it 12 times in one day. He may not have kept up with that kind of schedule since then, but when he said he had 7 days of nut stored up I knew it was going to be a hell of a finish. He was convinced that he was going to hit himself in the face.
Palmer’s nut sack pulled up so far that it all but disappeared as he got close to cumming. And, as he had warned me, his neck got flushed red. He didn’t quite shoot as far as his face, but the high-flying shots only missed it by a couple inches, covering his chest in globs of jizz.

END_OF_DOCUMENT_TOKEN_TO_BE_REPLACED

Spunk Worthy says: Mitch is 24 year old and another one of our upstanding military men here in San Diego. He had been thinking about getting into porn since he was hit up a handful of months back, but that situation “seemed sketchy.” Most recently, when he was approached, things fell into place pretty quickly and he decided to go ahead make the leap.
That’s not to say he wasn’t nervous. As soon as the cameras were turned on, you could almost see the beads of sweat on his face as he anticipated shedding his clothes for the world to see. As we got started on the Q&A part of the shoot, his anxiety slowly stripped away. Especially when we got to the subject of what he gets into sexually.
It was a little surprising to hear that Mitch is into bondage, he likes ropes and tying his girlfriends up. I asked if he ever liked to be tied up himself.
“Sometimes,” he replied with a mischievous smirk. “Depends on the situation. If they don’t know what they’re doing, then I just break free.”
Mitch has an infrequent jack-off schedule, preferring to go out and find a hook-up. He did, however, bust a nut in probably the most unusual place I’ve ever heard: on a military helicopter cruising at 5,000 feet.
Despite the normally rare dick stroking, Mitch had rubbed one out the night before. My guess was that he got turned on thinking about the shoot and decided to go for a practice round. As nervous as he seemed at the outset, the smile on his face when he was naked and the camera came in for the close-ups of his uncut cock told a whole different story. He was clearly getting a thrill out of the experience of showing off for the first time.
After getting the go-ahead for his cumshot, Mitch picked up the pace and left a thick puddle of cum on his stomach. And that’s when the truth came out: Mitch let out a big “Whew,” looked up into the camera and laughed, “That was fun!”

END_OF_DOCUMENT_TOKEN_TO_BE_REPLACED

Roger plays with his cock while jacking off pulling back his foreskin rubbing precum onto his big cockhead!……

END_OF_DOCUMENT_TOKEN_TO_BE_REPLACED

Donnie has quite the handful to work with it takes two handfuls to wank out his huge load!……

Spunk Worthy says: Donnie was, as he admitted, pretty nervous about doing a happy-ending massage shoot. That much was obvious even before the cameras were rolling. He’d never done anything with a guy before, so we were breaking some new boundaries.

I liked his attitude.

And, apparently, Donnie was more on board than maybe even he realized. At least his cock was which was growing stiffer by the second as soon as he lay on the massage table.

END_OF_DOCUMENT_TOKEN_TO_BE_REPLACED

Karl has been testing the waters with some bi curiosity!……

END_OF_DOCUMENT_TOKEN_TO_BE_REPLACED

Spunk Worthy says: When Oren got in touch, asking about coming back for another shoot, I hit him up about doing a happy-ending massage. Although he’d never gotten one before, he was all for it. I think his adrenaline junkie side was ready to take things up a notch.
He’d saved up a 2-day load, so you can bet he was horny. By the time he was face down on the table and I’d given his back a quick rub-down, Oren’s cock was already getting hard. I reached under him to pull his dick out and gave it some attention with plenty of massage oil, making sure to spread his ass and rub his virgin hole.
Once Oren was on his back, dick standing at full mast, it was obvious he was enjoying the ride. With every pass of my hands, his cock got stiffer and stiffer. I thought it might be time to see how it tasted. A barely detectable quiver ran through Oren’s body as I gave him a suck.
Trying to get him as close as possible, I teased his cock with my mouth and hands. Once the paced was picked up, Oren’s whole body began tightening. At the end, he grabbed the sides of the massage table and convulsed as his cum ran down the side of my hand.

END_OF_DOCUMENT_TOKEN_TO_BE_REPLACED

Anthony grabbed the lube and reached over to start stroking off Bryson!……

END_OF_DOCUMENT_TOKEN_TO_BE_REPLACED 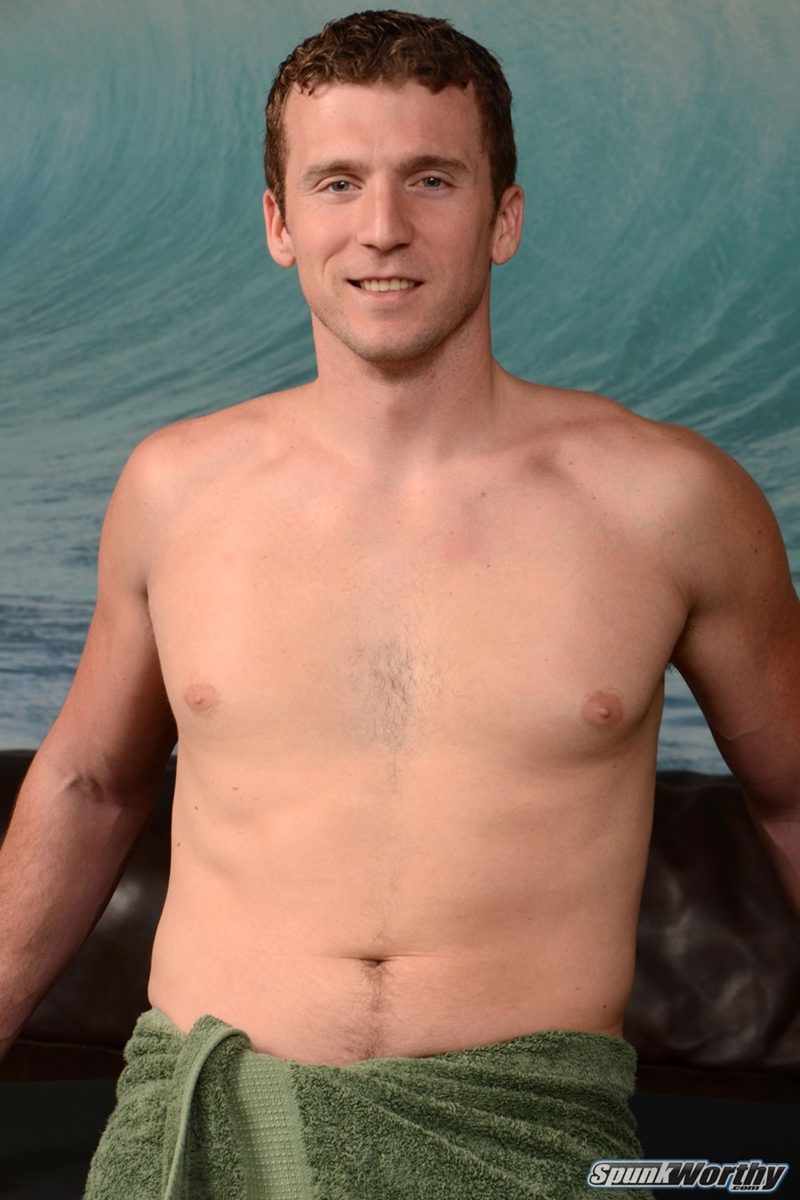 Glen dick was rock hard in a matter of seconds!…… 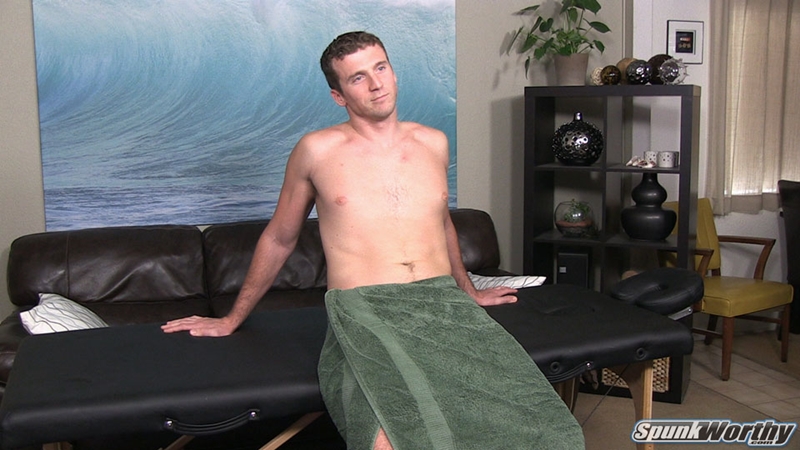 Spunk Worthy says: As I started rubbing down Glen’s back, there seemed to be some tension, though. Some residual nerves, I imagined. When I reached between his legs and pulled his dick between them, it started swelling up, but not in full force.
By the time he flipped over he was semi-hard. I figured the best kick-start to getting the show going was to give his cock a warm mouth around it. That certainly did the trick, and Glen was rock hard in a matter of seconds.
I noticed that Glen played with his nipples a few times during his solo, so I reached up and gave them a light pinch while ramping him up to the grand finale. 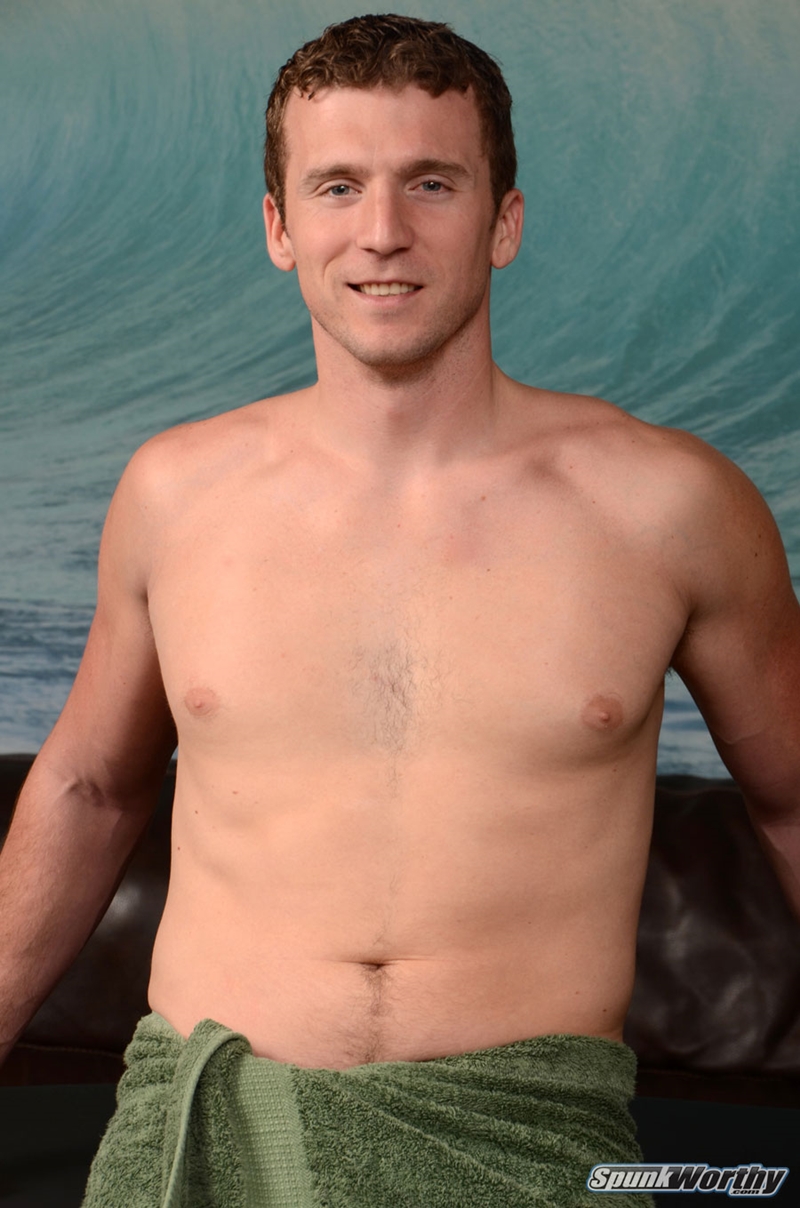 END_OF_DOCUMENT_TOKEN_TO_BE_REPLACED

Spunk Worthy says: Many of you have emailed or tweeted asking if Blaze was going to be coming back. I’m glad to say that the answer turned out to be YES! And he was hornier than ever when he showed up for the shoot.
Blaze is no stranger to happy-ending massages. He’d gotten a few while on overseas deployments. All from women, of course. He’d never even gotten a “regular” massage from a guy which, when I asked him if he had, made him laugh.
“Nope, first time. Popping both cherries!” he joked.
It was pretty obvious that there was some sexual tension going on, even before we started setting up for the shoot. I figured this might be a good chance to see how far Blaze was willing to let things go. By the time he lay on the massage table and my hands made their way between his beefy legs, Blaze’s cock was already poking out.
It got bigger within seconds when I spread his ass cheeks and rubbed his hole. The temptation was too much so I dove in and let my tongue do some of the work down there.
When Blaze rolled over onto his back, the boner he was sporting told me he was on board for the ride so far. I took my time, teasing his cock with some brushes with my hand.
His dick was so hard it was pulsating on its own and I was a little afraid that he’d cum too quickly. After a few strokes, though, I wrapped my lips around the shaft and gave him a few quick sucks.
To my surprise, Blaze reached down and pushed my head all the way down on his cock, squirming in pleasure. He set the rhythm, guiding my mouth up and down his cock that lead to one super intense cumshot.
His massive balls pulled up practically inside him and Blaze’s whole body clenched up while cum exploded from his cock, shooting up his chest and off the side of the table!

END_OF_DOCUMENT_TOKEN_TO_BE_REPLACED

Davis’ got a nice thick one too!……

The obvious part is that he said yes. But, it turned out, Davis isn’t new to the cameras. He’d done a solo shoot once before.

“I like doing it. It’s fun; it’s different,” he said nonchalantly.

It was 8 in the morning on a Saturday Davis’ idea when we went to set up his shoot. So I knew he was a little more gung-ho than just “it’s fun,” so I pressed him a little and he admitted with a laugh that he likes showing off a little.

With a body like his, who wouldn’t? Davis is kind of a sports nut which helps keep him in shape. But, even when we first met, I got the feeling that he enjoys the attention he gets from his physique. Feel free to stare. (wink)

If there were any doubts about his exhibitionist side, the way Davis’ cock sprang to full mast as soon as his shorts came off quickly dispelled them. He’s got a nice, thick one, too.

See Davis’ cock sprang to full mast as soon as his shorts came off here!